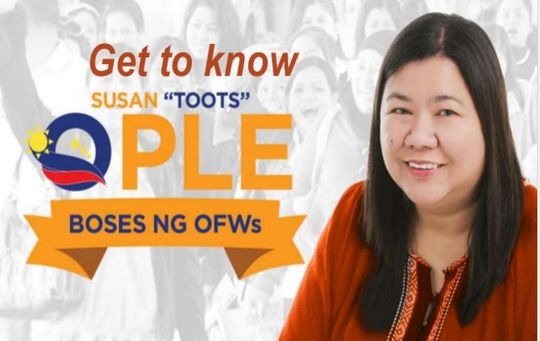 Susan "Toots" Ople champions the cause of Overseas Filipino Workers. She is counting on your 1.4 million absentee voting ballots to get a Senate seat in the coming Philippine elections. She plans to do at least three key reforms.

First, Susan Ople will push for a Department of OFWs to handle all your concerns. For Filipino seafarers, it will be a Department of Maritime Affairs serving you. This will ensure that you get help and support.

Second, she will enforce the law exempting OFWs from paying airport terminal fees. Current rules include paying for such fees in plane tickets. The refund system at the Manila Airport is chaotic. She will require full accounting of non-refunded terminal fees.

Third, she wants to modernize OFW-agencies like OWWA to meet the changing demands of working abroad. Susan Ople hopes that the absentee voting law will work in her favor. And that her efforts for OFWs will merit your vote.

Blas F. Ople Policy Center. Ople founded this non-profit center to assist OFWs in distress. The Center, named after her father Blas Ople, provides legal support to OFWs and who are victims of abuse and discrimination. It connects OFWs to the government for assistance.

The Center gives skills training to returning OFWs to help them find jobs. She partners with different industries and agencies to do this. The Center also sits at the Inter-Agency Council Against Trafficking, a body tasked by law to combat modern slavery.

Protect migrant workers and victims of human trafficking. Susan Ople earned the Trafficking-In-Persons Hero Award in 2013 given by the US. The award recognized her work to protect OFW rights and her fight to stop human trafficking.

Assist OFWs against injustices. She is the go-to person of OFW families for urgent help. In 2010, she helped in the release of Gerard Gonzalez, a seafarer who was held captive by Somalian pirates for three years. Ople also figured in the laglag bala issue. She asked the Senate to probe and urged the President to look into the extortion scheme at the Manila Airport.

Susan Toots Ople also fought against the opening of balikbayan boxes. She called for a review of the rules of the Bureau of Customs on this. She joined Senate hearings as resource persons to express the concerns of OFWs like you.

Empower OFWs. She has traveled to your places of work, in Hong Kong, Taiwan, and many other places, to discuss your issues. Human trafficking and illegal recruitment are close to her heart because of the hardships and abuses caused. Handling money is also key in helping you enjoy the fruits of your labor.

Her father Blas Ople championed the cause of labor and workers. Susan Ople keeps on fighting for the cause in her advocacies and platform for OFWs. Will you let Susan Toots Ople to be your voice in the Senate?